Jared has been making complete strangers laugh at him for over fifteen years. From humble beginnings at a hole-in-the-wall club in Baltimore, he is now the most humble person in the world, not that he’s one to brag about it. He was recently told that his comedy was “top drawer”, which is where he keeps his socks and underwear, so that makes sense.

During his career he has performed with the likes of Mike Birbiglia, Judah Friedlander, Richard Lewis, Tom Arnold, John Witherspoon, Jon Lovitz, Emo Philips, and Caroline Rhea. He was voted the 2013 Best Comedian in D.C. by the readers of the Washington City Paper. He was a featured performer at the 2017 What A Joke Fest, the 2018 LaughFest, and the 2019 Oak City Comedy Festival. His new album, Or Current Resident, is now available on XM, iTunes, and Spotify.

Here are some more of Jared’s bragging rights. 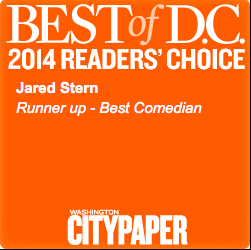 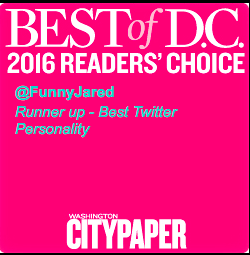