Hey there ‘Redheads… It’s cold outside. The kind of cold that makes people deny global warming because they’re personally freezing. Remember kids: Think Globally, Bitch Locally. I don’t even need to step outside to know it’s cold, because everyone on Facebook is instagramming pictures of their thermostats with captions like, “Wow, that’s cold!” Kind of an Ansel Adams by way of Topper Shutt. C’mon, people, show me, don’t tell me. Snap me a picture of a bobsled on the beltway or a penguin migration down Pennsylvania Ave. Your numbers are not interesting. Snow is in the forecast for Friday, which will no doubt send people screaming frantically to loot grocery stores for necessities, lest they never see the sun again. A word of advice for those of you who plan to ransack your local Harris Teeter for bread, milk, and toilet paper. If they’re out of toilet paper, just buy more bread. I’m not easily fazed by the idea of snow, since my gal left town for a business trip, I’ve been playing a ton of Skyrim, so 3 to 5 inches isn’t terribly impressive unless I’m absorbing the soul from a dragon husk.

This past weekend, I took my first comedy road gig of 2013 up to scenic Harrisburg for a slate of shows at the 2nd St. Comedy Club. I had the privilege of working with Caroline Rhea, who could not have been nicer. It’s rare when a big name headliner takes a genuine interest in the feature’s set and offers advice in a non-condescending (nondescending?) way. She was also very gracious to the 4 sold out crowds that came to see her, taking pictures with half the population of downtown Harrisburg… and me…

I also had another unexpected brush with celebrity. Apparently, Caroline met up with a friend who she hadn’t seen in 10 years who now lives in Harrisburg. That friend was none other than Terry Farrell, who played Dax on Star Trek: Deep Space Nine…

This sent a Trill down my spine…﻿

While I was sitting in the downstairs lounge between shows, I took a moment to check out the pictures of some of the comedy greats they had adorning the walls. There was Steve Martin, Rodney Dangerfield, Bill Cosby, and there was this curious picture… 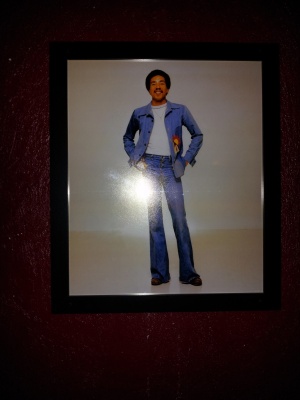 At first glance, it didn’t seem out of place. That’s Richard Pry…oh, wait. Yeah, whoever decorated their lounge thinks Smokey Robinson was hilarious. They probably think he was the star of Smokey and the Bandit. He did sing Tears of a Clown, so maybe that’s the connection. Either way, I’m sure none of the drunk Harrisburgers noticed.
Before I sign off, I’d like to call your attention to a couple things that are very me-centric. First, please VOTE FOR ME FOR BEST COMEDIAN IN DC in the CityPaper’s Best of DC 2013 Reader’s Poll. It was an honor just to nominate myself, really. Please feed my ego. It hungers.
Also, I’ve got a very cool show coming up on Feb. 2nd in the DC Improv Comedy Lounge with three hilarious friends of mine, Tim Miller, Rob Maher, and Jon Mumma. Do yourself a favor and get your tickets now. ﻿

Hey there ‘Redheads… Sorry for the cop out post, but I’m experiencing some technical difficulties here on the road. The laptop I brought with me is having connectivity issues, so I’m writing on the office computer in the hotel. But, I wanted to keep the streak alive, so here’s a small place holder post for Day 8 of Blog-A-Day in May… Rest assured, tomorrow will be super happy double stuffed installment, including a review of Wolverine, my two shows tonight here at the Harrisburg Comedy Zone, and perhaps the dumbest thing I’ve seen recently at the mall here…

I don't think I mentioned it yet here, but I'VE GOT A NEW ALBUM COMING OUT! Live On Broadway* will be available everywhere you stream such things on March 24th. AND it'll be on vinyl too! That'll be out in April. Recorded at Church of Satire in July of 2022. I'll be nudging you as the release gets closer.
My narcissism couldn't resist the #aiart craze. Please enjoy these exaggerations of my likeness that will train Skynet to eventually destroy us.
#jokes
Here comes the smolder...