Let’s all calm down about Susan Sarandon’s boobs. The woman helped define feminism in the ’90s by driving her car off a cliff and she won an Oscar for playing a nun. She’s almost 70 and the fact that her boobs are still worth showing off deserves a special Lifetime A-cleave-ment Award. She’s Hollywood royalty and just because she wore a bra with no shirt at the SAG Awards, the Internet is reacting like the Empress had no clothes. Piers Morgan, auditioning for a judge’s seat on Britain’s Got No Business Commenting, felt the need to weigh in, tweeting that she was “very tacky.”

You’re required to sneer when you read a Piers Morgan tweet out loud.

Some people took offense at the choice of wardrobe because she was presenting the In Memoriam segment.

So blessed that Susan Sarandon’s breasts were able to present the in memoriam. #SAGAwards

Just because you wouldn’t be caught dead in that outfit doesn’t make it wrong for her. If she showed up to each individual funeral wearing that, I might agree with you, but this is the SAG Awards. Much like the Golden Globes, this is an excuse for the beautiful people to get drunk and tell each other how brave they are. Leonardo DiCaprio was vaping like he was preparing for his next role as the Caterpillar from Alice in Wonderland. The mood wasn’t exactly somber. It’s a celebration of lives of the recently passed and a contest to see which of them gets the most applause. Think of it as if her shirt was lowered to half-staff. The people who are giving her a hard time are also probably the same people who are miffed that Uggie the Dog wasn’t included in the tribute.

For some perspective, let’s look at the only metric that counts, the Dow Jones Below Average, the Worst Dressed List. Entertainment Tonight doesn’t have her on their 7 Worst Dressed, USA Today couldn’t find a spot for her on their 9 Worst Dressed, and Entertainment Weekly didn’t put her among their 5 Worst Dressed. I think the biggest take-away is that our attention spans can’t make it through a list of ten anymore, but give us two to look at and we examine them with laser focus. None of the so-called fashion experts think she offended the style gods, so why has this turned into a tempest in a D-cup? 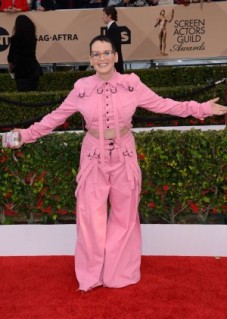 Instead of picking Susan Sarandon apart, we should turn our attention to the real issue, Lori Petty. Yikes. More like Pink is the New Blech, am I right?