Hey there, ‘Redheads… It’s Monday and the world is still spinning. Instead of literal hell on Earth, we just have to deal with the figurative purgatory of punching the clock and spending the day in a tiny cube. Us reasonable people were proved right and those kooks were mindless morons. They were sheep and the fire they should’ve been warned about was the one inside the kiln that the crackpot they were following was baked in (stay with me). But let’s hold our four horses for a second. Allow me to play devil’s advocate for a moment. What proof do we have that the Rapture didn’t happen? We’re still here? That’s pretty arrogant to think that any of us would be worthy enough to make the cut. I’m no theological scholar, but I’d have to think that the standards are pretty strict. Think about it, sure, our society has advanced in it’s values and technology over however many thousands of years since biblical times, but for God, that time has been the blink of an eye. He probably still goes by the ten commandments he gave to Charlton Heston. And everyone has broken one of ’em. Even the big one, “Thou shalt not kill.” Everyone has swatted a fly, stepped on an ant, killed a hooker… These are all God’s creatures, people. Commandments aside, there’s also the seven deadly sins. Trust me, Facebook alone violates the vanity clause for everyone on it.

If anyone was vaporized by Jesus, it was probably a conclave of nuns, closed off from the outside world, who gave up all of their worldly possessions and eat one crumb of bread a day. Who’s to say Jesus didn’t return on Saturday? He might’ve just appeared in Detroit and thought, “Wow, somebody beat me to it.” And this was just supposed to be the beginning of the end. We’ve got six months before a giant marshmallow man crushes us under his fluffy heel. Just sayin’, is all.

Enough of that claptrap. As I mentioned in the last blog, I spent the weekend bringing mild amusement to dozens of people at the Comedy Zone in Myrtle Beach, located in the Hilton Resort. This was the view from my hotel room… 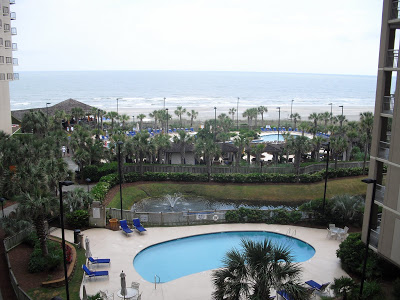 I’m not usually a beach guy, but I figured I shouldn’t let such a prime lounging opportunity escape me. I stretched out poolside and sipped an Arnold Palmer made with sweet tea vodka while I charged up the pasty solar panel I call a chest. The sun and I have an understanding. If I promise not to take my shirt off more than an hour at a time, it won’t use me for kindling. The last time I soaked in too many rays, I got burnt so bad I should’ve gotten super powers. Overall, good times.

On the drive to Myrtle Beach, I got a call from my girlfriend telling me that Randy “Macho Man” Savage had died in a car accident. He was one of my favorite wrestlers when pro wrestling had captured my 10 year old imagination. I found a tribute on one of my go-to nerd blogs, Topless Robot, that echoed my sentiments almost exactly. Allow me to share…

I don’t know if I can really express how sad I am that Savage is gone. He’s just one of those people who have given me so much entertainment and pleasure in my life that I find myself genuinely upset now that he’s gone. I was only into wrestling a bit as a kid — a couple of years, although I was terrifyingly obsessed with it during those two years — but even after, I was always a Macho Man fan. Maybe it was just his journey from evil wrestler to good wrestler — and WWF champion — hit me at just the right time, where I was totally enraptured. Maybe it was because unlike Hulk Hogan, Macho Man was actually a genuinely great wrestler. Maybe it was because Macho Man was flawed and weird and dangerous and batshit insane and somehow just more fascinating to me than all the other wrestlers. Everyone had their one shtick, but Macho Man was only ever Macho Man. Let me put it another way: if Hulk Hogan was Superman, Randy Savage was Batman. Watching Hogan fight was fun but predictable; watching Macho Man do anything was always exciting, and always awesome.

I can’t say that Randy Savage had a direct influence on my professional or personal life, but I can say now that he’s gone, a part of my childhood is gone, too. Thanks for everything, Macho Man. Seriously.

I've seen this movie so many times over my life, I can't even count.
An early-pandemic impulse buy I finally got around to affixing.
#changemymind