Hey there ‘Redheads… Welcome to March. The month of the madness. One of the greatest sports months on the calendar, provided your sport is gambling on college basketball. This particular NCAA tourney will be extra special, because it’s the first time in 3 years that my Terps will be taking part. They’re a very convenient team to root for, because I already bleed red (we won’t discuss where the black and yellow come from). The only thing that stunk about last night’s drubbing of Duke, were the techinical difficulties suffered by ESPN. The last 5 minutes of the game had to be acted out by Scott Van Pelt and Stuart Scott doing shadow puppetry while Dick Vitale narrated because the video feed got screwed up. It went from HD to Orson Welles radio drama. Long story short: Fuck Duke.

Today-ish marks a comedic milestone for me. Stick a candle in a cupcake and wish me a happy comedy birthday. I’m five. Yes, it was the end of February 2002 when I went to my very first open mic at the now defunct comedy hole in the wall that was Wichester’s in Baltimore. If my memory serves me correctly, Mike Shader was the host that night. I had scribbled down what I thought was 5 minutes of material…turns out it translated into 3 nervous yammering minutes on stage. I have in front of me, the set list from that night. I’m happy to say, I don’t do any of those jokes anymore. Let me see if I can transcribe some of my embryonic chickenscratch for you…

Material:
Grandpa Izzy –> senile memoirs…wrote the first unauthorized autobiography, entitled Where The Hell Am I and Who The Hell Are You People? He claims he discovered irony, when he got fired from the unemployment office.

I have dyslexic amnesia…I have no memory of what’s about to happen to me.

I do alot of community service…every morning I hit the streets to provide the homeless with fresh…cardboard and sharpies. I teach them alliteration: Homeless, Hungry, Help. I also do work with the BFMSM…which is Bouquets For Median Strip Mexicans.

That’s the most I can piece together from the ancient text. Besides, I should leave some mysteries for comedic scholars to ponder when they open the shitty comedy wing of the Smithsonian. I think I’ve done well to walk upright in the stand-up world since then. In Jerry Seinfeld’s documentary, Comedian, he says that your age in comedy parallels the development of a child at that age. 5 years old…I’m pretty well potty trained, able to handle the shit that comes my way…and I say the darndest things, don’t I? Pretty soon, it’ll be time to go to school, whatever the hell that means. So, here’s to further development and unstunted growth. I’ve got some cool play dates coming up. Be sure to check out the show at the brand spankin’ new DC Improv Comedy Lounge on March 11th. Myself and two other funny little stinkers, Jon Mumma and Danny Rouhier, will be doing 30 minutes apiece. Come laugh at our fart jokes. Click here. Be there.

Speaking of cute kids, check out this video of my nephew, Mo…

Also, a happy 30th birthday to DC comedy den mother, Amy Mumma. She had a humdinger of a party last Sunday at Chuck E. Cheese for adults, Dave & Buster’s. The comedy sewing circle in attendance had a grand time telling stories that cannot be reprinted here…let’s just say it was a gas (for those who were there: nudge nudge wink wink). And it better be 30 more years before I see Justin Schlegel’s yam bag with balloons tied to it again. Look for pictures from the event in a future installment…don’t worry, not of the aforementioned yam bag.
(UPDATE 3/02/07: Got ’em…here they are)

Even when posing for pictures, at least one of us kept it gangsta…or something. 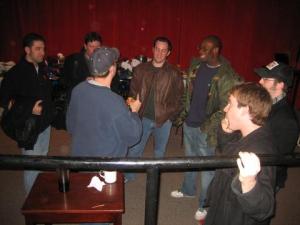 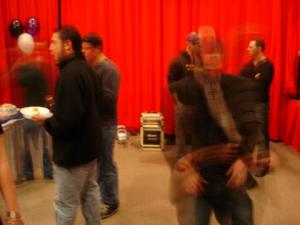 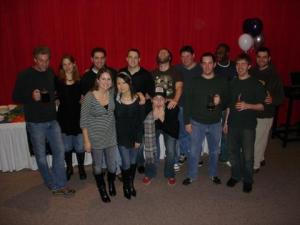 There you have it…photographic proof we had a good time.

Fun shows coming up on Friday in the Lou Room at @zissimosbar !
Had a great weekend exploring my benign narcissism with Adam Conover!
This was wild... draw four.
Fun with the @midjourney.art AI